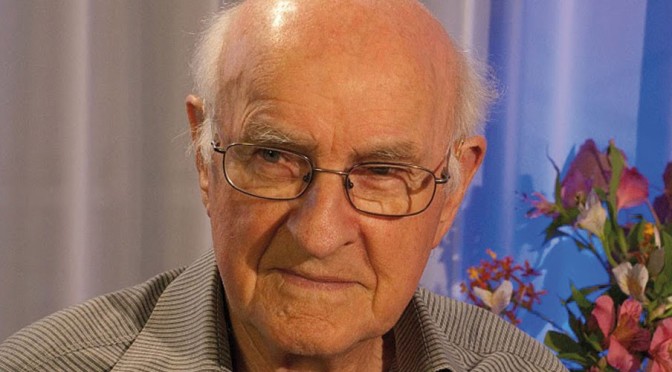 Recently Sir Lloyd Geering delivered a lecture at the Auckland Readers and Writers Festival in Auckland, provocatively titled “How Humans Made God”.[i]  Whether we like what Lloyd’s views or not, I think they are worth considering.  This morning I would like to give a synopsis of his lecture, and a brief response.

Lloyd begins by paying tribute to Ludwig Feuerbach [1802-1874], a disciple of Hegel’s, who first asserted that humans made God.  Hegel understood reality to be a dynamic process in which the physical world emanated out of spirit or mind.  This reflected the biblical view of God or spirit making physical matter.  But the real truth, said Feuerbach, is that spirit or mind emanated out of physical matter.  The human mind developed out of a physical body and brain, and ‘God’ is an idea in the human mind.  Feuerbach wrote some 20 years before Darwinism.

Lloyd then moves on to talk about the evolution of human language, from which arose the idea of God.  Language evolved from a primitive means of communication to a means of constructing a thought world.

As children we give names to familiar objects, thereby transforming an unknown world into a known one, and making it our possession.  Our ancient ancestors did the same.  But what could not be seen but only felt, such as wind and breath [in Latin spirit], remained mysterious, and could not be wholly possessed.  The primitive human mind imagined itself surrounded by an invisible spiritual world of which wind and breath were the tangible proof.

To the ancients it seemed self-evident that all natural events like storms were caused by invisible spirits, into whom they projected their own personal experience.  By giving these spirits names the gods came into being.  In our oldest written records we find gods well established and humans feeling themselves to be at their mercy.  So in Mesopotamia we get Tiamat and Marduk; in Greece Zeus and Apollo; and in Rome Jupiter and Venus.  The gods were created by humans to identify and explain natural phenomena.  Humans had to respect and obey these gods if they hoped to survive.

The cultural age of the gods lasted a very long time.  Then in the Axial Period, around 500 BCE, in five or six different places stretching from Greece to China, the gods came to be modified and abandoned.  The many gods of polytheism had evolved into a stage of henotheism [exclusive allegiance to one god while accepting the reality of other gods], and now evolved into monotheism.

For the Jewish people this – what Lloyd calls – ‘birth of God’ happened during a period of great cultural crisis: the Babylonian Exile.  Far from their homeland, in fear of losing their heritage and faith, the Jews re-interpreted their own traditions to make sense of what they were encountering and to ensure their survival.

The Torah, the first five books of the Bible, was the result.  The Torah asserted that everything is to be traced back to one source that it called God.  The Jews had gone into exile as henotheists and returned to years later to their homeland as monotheists.

Lloyd concludes this section by asserting that perhaps ‘God’ was the most important concept that ever came to birth in the evolving world of human thought.  In a metaphorical sense God did create a world, a centre, a focal point, to which everything else could be related.  This centralizing idea was a foundation stone for both Christianity and Islam.

It’s only since the 1800s, the time of Hegel, Feuerbach, and Darwin, that we have been able to appreciate we live in a changing and evolving universe.  We are much more aware today that our language, ideas, knowledge and even science are always changing.

The capacity of the human mind to project itself on to something external to itself is now accepted as a common psychological mechanism.  This explains why many fervent believers in a personal God so often claim that they know precisely what God is thinking and planning; it’s because they are unconsciously projecting on to God what they themselves inwardly think and aspire to.  Thus there is a close correlation between a person’s thoughts and the way God is conceived.

Feuerbach came to realize that we project onto ‘God’ all the values we hold dear – like love, compassion, and justice, and all the abilities we would like to possess – like power, knowledge, and insight.  The study of God therefore is the study of our highest human values and aspirations.

Lloyd posits that today it is the theism in monotheism that is dying.  The more religion promotes an all-powerful deity, the more modern people see from the events around them that such a deity is powerless, then the less credibility such a deity has.

The idea of God has though served well as a symbol affirming the unity of the universe.  The basic premise of all scientific inquiry is that natural phenomena operate in a rational and comprehensible way.  This arose from the prior conviction that whole world had been created by the one super intelligence called God.

Lloyd concludes that in this time of the death of theism we humans find we are on our own on a tiny planet in an unfeeling universe that has no interest in us whatsoever.  Equipped only with the tools of science we must now shoulder responsibilities for our future that we once used to attribute to God.  We now have to play the role of God.

Nearly 200 years ago Feuerbach argued that the death of theism had been the goal of Christianity from the beginning.  The doctrine of the incarnation asserts that God came down to earth and became incarnate in Jesus.  The heavenly ‘God’, into whom humans had projected their highest values, was enfleshed not just in Jesus but all humanity.  Christianity is good news because it opens the way for humankind to live life to the full by learning how to embody its own highest values.  The central Christian symbol – the cross – symbolized the death of God.  This was the death that left the heavenly throne empty.

At about this point Sir Lloyd concluded his lecture.

I find much truth in what Lloyd says about the evolution of human language, our thoughts, and our gods.  There is also much truth in the power of projection, of wanting to shape our deities in our own image – with some super powers added.  The idea of God as a unifying symbol is interesting, and one wonders what Lloyd thinks might take its place.  Science?  Knowledge?  Humanity?  Deifying science or knowledge or humanity brings its own problems.

As those of you who have listened to me for many years realize, although I try to avoid labels, I am what could be called a ‘non-theist’.  By that term I want to discard the theistic being who masquerades as an all-powerful, all-knowing, and all-loving superman.  However that does not mean that I discard the notion of God, nor see God like Lloyd as just a unitary symbol for the best of humanity’s values.  Though always with a degree of sceptical self-critique, I want to claim that my experiences of sacredness, particularly in the power of mutual loving relationships, transcends the boundaries of my mind, and probably the boundaries of our collective mind, knowledge and science.  I want to claim that there is some form of sacred presence, which I experience most profoundly as compassion, which the early Christians experienced in Jesus and in their community after his death, which can be called God.

It is often easier to name what I believe God is not than to struggle to name what God is.  However to follow Lloyd and limit God to simply a unifying symbol created by minds is too reductionist for me.  Instead I want a doctrine of God that embraces wonder and mystery, the power of mutual love, the spirit of joy and laughter, and the evolution/revolution of creative change.

[i] If you would like a full copy of the lecture, email me at

2 thoughts on “Humans Made God?”